Google changed Android with Nougat (7.0) making it much harder for existing “Task Manager” style apps to work on an un-rooted phone. However, hope is not lost. It turns out, some of the app manager apps work partially… 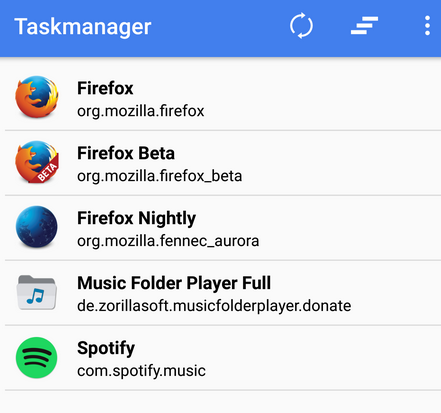 By partially I mean they work with some apps, but not all Android apps. For example, most of Google’s apps DO NOT appear in the list of running apps, but other popular apps do, and they can be killed this way.

The app in question is Task Manager created by Byte Hamster, compatible with Android 2.3 and later, and with over half a million installs. It averages 4.4 out of 5 on nearly 8000 ratings.

I’ve used it on the factory unlocked Motorola Nexus 6, running the official OTA Android 7.0. Sadly 7.1 has still yet to become available OTA! Google really mangled up the Nexus 6 upgrades, because now they are a high-brow Apple-wannabe 🙂

As you can see above, popular apps like Netflix, Spotify, the various Firefoxes, and the Music Folder Player can all be “found” and killed with it!

Other popular apps that work it, not in the screenshots shown above:
+ Samsung’s Internet Browsers (for all Android devices)
+ Tasker, NavBar Apps
+ and a few more

The app is fairly lightweight, but only intermediate in turns of the more advanced task manager features. But the only one I’ve found to partially work on Nougat makes it invaluable 🙂

ONE THING TO NOTE
One thing to note however, as apps update to newer versions all the time, they may be switching to newer APIs and libraries that make them invisible to this app. So just because they work now, there’s no guarantee all future versions of these compatible apps will work forever.