STORAGE after FIRST BOOT
As you can see from the quick picture below, most of the pre-installed data is on the C: drive, which is 150GB total with 34GB in-use. The D: drive is 780GB total, and as you can see, almost empty (195MB) 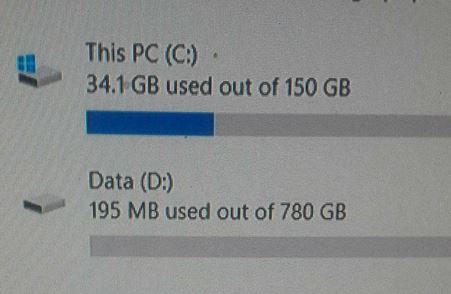 The above is a summary. If you are interested in more details, we start from the beginning right below:

STARTING the ASUS M32CD for the FIRST TIME

and now CONNECTING TO THE INTERNET
Having turned off a lot of data hoarding and background buzzing apps, turned it off for about an hour, I finally plugged in the Ethernet cable for a network connection and restarted it. I turned off Wifi since I won’t be using it. It’s a desktop tower after all, it won’t go far away from the router 🙂 The network connection was seamless and without problem. I got a very nice 88~ upstream on Speedtest, faster than anything else I ever got on my network. Hooray for speed 🙂

I also updated the Windows Defender data (virus and spyware definitions) and run a Quick Scan which of course found no problems. The dates were interesting, they were 132 days behind, first created in June 2015, and last updated July 2015.

PROBLEMS
There was one actual bluescreen error, it flashed before I could write the full error, but it was some kind of an “uncorrectable error”. It rebooted on its own after showing that error. After the reboot, all was well.

Also, after the first boot, the actual text disappeared from the Windows Button Menu and the Notifications (Windows-A). Everything else was fine. I kept killing the Cortana background app, I don’t know if that or some other Settings tweak I made caused that. It got resolved later (I don’t remember the details – the tablet I was taking notes on overheated and lost those notes).

The above problems only happened once so far. I will definitely be monitoring it to make sure those were initial setup flukes and not something recurring.

TIP if using Hybrid TV/Computer Monitor
If you are using a hybrid TV/Computer monitor and connect to it via HDMI, and you don’t see the picture properly centered (eg zoomed out or zoomed in), check your monitor’s settings. Your default may be messing it up. In my case, I changed to “Just Scan” and all is well. The previous settings that worked for video input (Roku/BluRay) did not work for this.