FIREFOX: Firefox is my main browser. I love using Firefox Profiles to segment and organize different tasks and activities, and limit the use of Add-Ons and Plug-Ins. For example, I designate one Firefox Profile as a media player, so only that one would get (if needed) Silverlight, Flash, and plug-ins/extensions of that nature. Opening multiple Firefox instances back to back to back is very fast. They come up as fast as I can click on the next one.

I started with a fresh Firefox installation, so none of the baggage was carried forward. Flash is not installed with it and I have not added it. I use the Edge browser for anything that insists on Flash. The only thing I carrier forward was the passwords (if anyone’s interested, I will have a separate post on how to do it). Even with multiple profiles, there’s still plenty of RAM left to go around. No performance complaints, the only issue is an occasional Intel Display Driver error (see the Problem #1 section below).

SPEEDTEST: using the same internet connection as before, I am getting personal record-breaking speeds on Speedtest.net. My previous all-time high was around 60 Mbps but that was rarely reproduced (I don’t remember which device got that high scorer). With this PC, I am getting around 90 Mbps using the Ethernet connection. (I forgot to take measurements via Wifi).

THE INCLUDED KEYBOARD it is a very wide keyboard, however, for touch-typing it is horrible. The keys on the middle-right bottom-half are not aligned well, which makes attempts at touch-typing in that part of the keyboard a major exercise in frustration. I already replaced it with my regular keyboard. It also has very short legs, which expand sideways instead of the usual front-back. If you have a lot of space on the X-axis but not on the Y-axis, this may fit in places other keyboards won’t. It measures around 17.5 by 5 inches. It is not tall either.

THE INCLUDED MOUSE: I am still using the included mouse, mostly so I can write the review. It is a serviceable mouse if that’s the only one available, but for power users or heavy use, you probably need another one. The scroll-wheel is squeaking already. It has a blue tracking light underneath. The left and right buttons are easy to press and have a lot of pressable area. Pressing the scroll-wheel opens in new tab, but that’s about it in features. Two buttons, the scroll wheel, but no DPI controls or other buttons. You can use the blue light as a reading light – eg read the credit card number while shopping in the middle of the night.

Windows 10 Forced Update Annoyance: This is not this particular PC’s fault, but for many people this may be their first Win10 experience, so I’m mentioning it: this new forced Windows Update is horrible, it makes Windows unreliable for time-sensitive tasks. If you have a deadline or something else time-sensitive or urgent, you don’t want to have to fight off Windows Update for resources. What I end up doing is I occasionally force a Windows Update (press WINDOWS + S, then type “Update” then click on the “Check for Updates” option), so I won’t be bogged down by a random Windows Update later.

PROBLEMS NOT RETURNING
And now some good news! During the Initial Boot, I noticed a couple of problems, a bluescreen and separately, the text disappeared from the menus. Thankfully neither one of those issues ever returned since then. No bluescreen again! And no menu-text disappearing act. So perhaps that was just initial start-up/update jitters?

PROBLEM #1: Intel Display Driver errors with Firefox
This happens once every few hours with Firefox. I am running the latest version (41.0.2) as of the time of writing. During this, the Firefox Tab I am looking at goes black, and an error from the Display Driver pops out from the System Tray. The error stays on the screen only for a couple of breaths, then disappears.

Here’s a close-up of the error message. This is the best screenshot I have been able to capture so far. It disappears too quickly.

That error pop-out comes from the Intel driver and is in the bottom right corner. Here’s the browser window screenshot with this message in the corner: 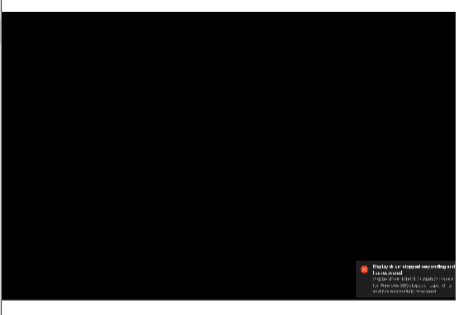 All but one time this happened, it was easy to recover, you just slightly resize the Firefox browser window and it returns to whatever it was showing before. Only the current instance of Firefox is affected. The other Firefox Profiles continue to work (one more reason to use Profiles as opposed to one giant bloated instance). One time the resize trick wouldn’t work, I had to kill that Firefox Instance (Profile) and restart it.

*** UPDATE 11/11/15 *** This continues to happen on a regular basis (every few hours) with Firefox, currently version 42.0. I don’t recall seeing this with any other program. I don’t use any other browsers on this, except when Flash is needed, then I hold my nose and fire up The Edge 🙂 Keep in mind, I am running multiple Firefox Instances with multiple Tabs in each.

PROBLEM #2: VGA output went blank when removing external HDD cable
I plugged in and out a few external hard drives for file movements and backups (and HDD storage inventory). All was well, except for one. It was an internal hard drive in an external enclosure, powered by its own AC power. It was connected to the front USB 2.0 port. When I removed the USB cable from the hard drive enclosure, the computer screen (VGA input) went blank. The computer was running fine. I plugged it into the HDMI port and sure enough, the computer was working fine.

I then removed the VGA cable from the PC, and re-connected it, and voila, the VGA signal came back.

This only happened once, but I will be paying attention the next time I connect that particular external hard drive.

PROBLEM #3: Bluetooth Resurrection
I am not sure why things have to be so difficult with Bluetooth and Microsoft. On Android, you pull down from the top, and you turn Bluetooth on or off. It’s really simple. With Windows laptops, you have to fight through byzantine menus or hope that the OEM provided a shortcut app or shortcut button. But on this desktop, Bluetooth is hard to kill. You can’t turn it off from the Notifications (Windows + A). You can’t kill it from the Metro settings. You have to go into the Classic Windows settings. And that only turns it off until you reboot again. Then it’s back.

For me, this is a low priority, since it’s on AC power, so it’s not eating up battery, so I did not yet bother to search for solutions. I turned off findability by other devices. I’m not sure why this is so. Wifi on the other hand, also from Realtek, stays turned off permanently (I am connected via Ethernet).

QUESTIONS?
If you have any questions or want me to test/check things, please leave a comment!

If you found this on-going review useful, whether you want to purchase this PC or anything else at Amazon, please consider using this affiliate link to help support this effort. Thanks!