In this edition of “Tech Issues”, it’s a problem of my very own! The last few of weeks I am getting random reboots of the Nexus 6. It is running OTA Android 7.0 (it hasn’t yet been officially “invited” to get 7.1), and was not among those who got the previously-retracted 7.1 update.

UPDATE SEPTEMBER 2017
I haven’t done an engineering debugging session on this, but it looks like the issue may be happening mostly when internet connection goes out, eg bad spots. But not always.

The other change I made was to remove the 3rd-party Project FI app. My next experiment will be to re-install the app…

So I’ve been trying to figure out what might be causing it. The changes I am made recently:

END_OF_DOCUMENT_TOKEN_TO_BE_REPLACED

Just like the Cylons, I had a plan! First I reviewed the Nexus 6 running Marhsmallow for posterity. Then I upgraded to Nougat (no problems!). And now to the third step, I switched from T-Mobile to Google’s Project FI.

WHY SWITCH TO PROJECT FI?

Once upon a time, T-Mobile was an uncarrier. Now they are more or less at the same un-un-carrier level as Verizon and AT&T, and I realized I was paying a lot more than I was using. With the data-hungry “Walmart plan” going away (5GB per month on $30/mo prepaid), there was nothing useful at T-Mobile to downgrade to.

END_OF_DOCUMENT_TOKEN_TO_BE_REPLACED

My Nexus 6 (unlocked USA version purchased during an Amazon Gold Box special) was among the last it seems to get an OTA invite to upgrade from 6.0.1 to 7.0. Since the OTA invite came out, the whole kerfuffle broke out (see section below), so I hesitated. Then that OTA invite got pulled and replaced with a newer one. The one that got pulled was over 1GB big. The 7.0 was about half of that. 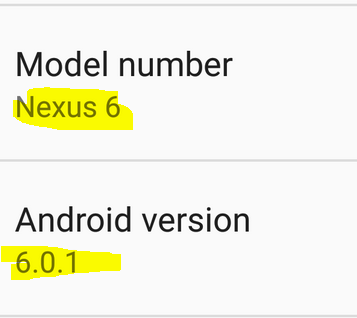 Since this was a big version upgrade, I did this while connected to AC power and had plenty of available space. The version I installed: 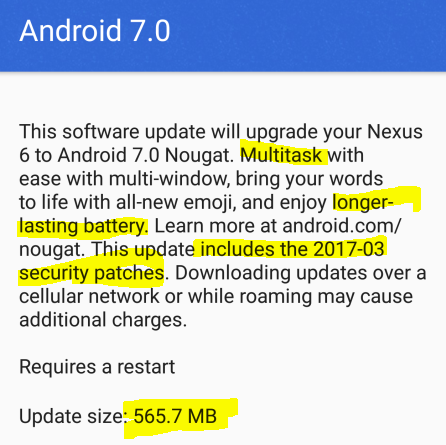 END_OF_DOCUMENT_TOKEN_TO_BE_REPLACED

I bought this unlocked Nexus 6 back when it was a Gold Box daily deal at Amazon and my good old Nexus 4 (still alive and kicking by the way) was getting too old and too slow and more importantly wouldn’t be getting any more major Android OS updates. Fast forward to now, is this a usable phone in 2017?

This review is based on the phone running Android 6 (more specifically 6.01). After this review is done, I will upgrade it to Android 7.x and once I have a stable update, I will switch to Project-Fi. So there are at least two more reviews coming on the Nexus 6 ~ along with the promised case reviews 🙂